THE SPIRIT IN OUR MIDST 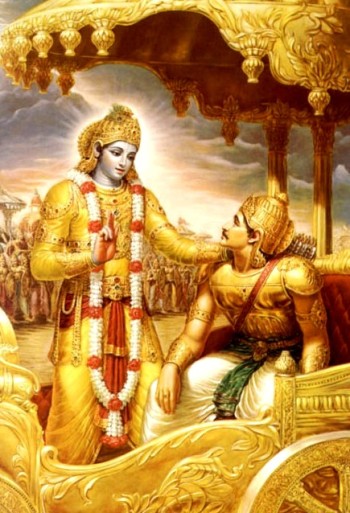 2. The Secret of the Gita

The bulk of the Bhagavad Gita is narrated by God incarnate, just like the Christian Gospels. In this case it’s Krishna, an Avatar of Vishnu, presented in the text as the supreme deity of the universe. Krishna nevertheless had a human occupation: he was the charioteer of the warrior Arjuna. In the middle of a battlefield, with two great armies poised to attack each other, Krishna revealed the secrets of Supernal Spirit to Arjuna so thoroughly and eloquently that his discourse has served as a spiritual wellspring for billions of people for thousands of years.

The Gita is filled with descriptions of Supernal Spirit: how to attain it, what the experience of it is like, how the world looks to the individual who has it, and how such people live their lives. The idealized Jnanin or yogi is said to have conquered his senses and risen above fear, hatred, anger, and desire. He maintains an even-minded detachment amidst all of life’s trials and in any company: saints or sinners, friends or foes, even dogs or outcastes (mentioned specifically in that order). He sees it all with an equal eye, for he has attained self-mastery. This feat has cosmic implications, because the Sanskrit word for “self” is Atman, whose meaning applies not only to individual identity but to the universal GodSelf. Thus Krishna says of the yogi: “His soul (atman) becomes the Self (Atman) of all beings” (Gita 5:7).

Many passages emphasize that a vital component of this path is devotion, i.e. bhakti, perhaps the most-repeated word in the Gita. Western translators often render it as “love” in contexts that seem similar to the Christian Gospels, though this can be misleading. The devotion is specifically to Krishna as Personal God, which in Hindu theology is distinct from the impersonal aspect of Supernal Spirit, designated as Brahman. Thus Krishna helps his devotee to navigate the trips and snares and infinite complexities of Jnana practice, but in the final liberation he transcends even Krishna ~ he realizes his own Atman as Brahman: the Absolute Reality beyond all form, even beyond the Personhood of God. Krishna says that the yogi who finds this BrahmaNirvana becomes divine (5:24).

As gratifying as this goal may be, the difficulties of its attainment are clear, and hence the fact that only an elect few can ever reach it. This is underlined in Hindu doctrine, which holds that it comes as the culmination of thousands of years spent by the soul on the path through many lifetimes. So what is to be done by the rest of humanity, the great mass who fall short of mastery? Are they forever lost in the common state of collective woe? The answer is given by Krishna in chapter 12 in reply to a question by Arjuna: who are the best yogis? Drawing from the whole chapter and several translations, here is Krishna’s answer:

Those who with unshakeable determination fix their minds on me, and worship me, ever devout, possessed of supreme faith, those are the best yogis. Those who are compassionate, who have no thoughts of ‘I’ or ‘mine’, with their hearts and minds given up to me ~ these, my devotees, are dear to me. Those who have given up self-will in all actions, who hold me as their supreme aim, who are united with me constantly in meditation, who find their home in me and not the world ~ these, my devotees, are exceedingly dear to me.

Between these key lines there’s lots of advice about developing skill in the practices, cultivating non-attachment, renouncing the fruits of action, etc. But the quoted excerpts convey the open secret of the whole teaching: devotion alone is sufficient to reach the goal. Furthermore, if the sincere bhakta (devotee) falls short of the ultimate attainment of Brahman, he or she can dwell forever in the Supernal bliss of Krishna. This penultimate attainment is equally worthy as the supreme end of an ascending soul. And for the vast majority of incarnate souls, it is in fact the highest goal possible.

Krishna’s discourse in chapter 12 cuts through the infinite complexity of spiritual seeking and decisively divides it all into two basic paths: self-liberation and bhakti. They can intermesh extensively, but in the end the seeker must either attain identity with the transcendent Godself or form a permanent devotional relationship with the personal God. The first way is traditionally pursued under the aegis of a God or guru, but this is not necessary ~ an individual can tread this path totally on his own recognizance. The odds for success are greatly enhanced when he has access to many different sources of guidance and information, as in the “new age” of postmodern times. And in fact there are probably more individuals possessed of, or in quest of, Supernal Spirit today than ever before in the history of the world. Yet the society as a whole continues its headlong plunge into avidya (spiritual ignorance), moral decay, and the nightmare of dehumanized life in a mechanoid civilization on the brink of apocalyptic collapse. The striking contrast between these two poles of present-day life highlights the desperate need for the way of bhakti, which is precisely the collective path of Supernal Spirit, as we’ll see in the next chapter:

6 thoughts on “The Secret of the Gita”