For a long time I was intrigued by the timeless legend of Parsifal, especially Richard Wagner’s operatic version, and in 1997 I was inspired to retell the tale myself. I was faithful to the basic mythos from the classical sources, but gave it a a few new twists. The story drew more glowing reviews and comments from readers than any of my other writings, and it’s the only one that’s ever been selected by a commercial publisher for distribution. A typical example of the feedback came from a man who read the story on the Web in preparation for seeing the opera for the first time. He said:

Your portrayal of the events was so moving that I felt compelled to send this email to thank you for your work. The opera was resplendently magnificent, but I must admit that I like your story better than Wagner’s. Your elaboration of the seduction scenes in particular are more poetic and beautiful than his.

Parsifal and the Holy Grail 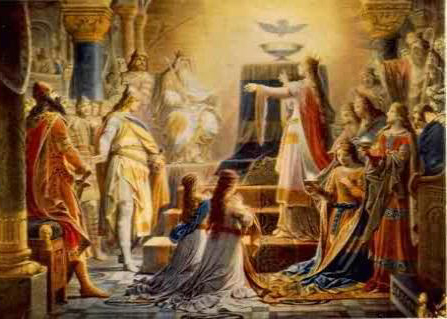 Click on the title or image to go to the complete story.

Some whitesiders, mostly Pagans, criticize Wagner’s Parsifal on the grounds that it purveys Christianity, echoing Nietzsche’s scathing diatribe against Wagner which he wrote after seeing the opera. By contrast, Adolf Hitler found it inspiring and exalting, though he was in accord with Nietzsche’s philosophy on many fronts. Soon after he became Chancellor in 1933, he directed the issuance of this stamp, commemorating the opera: 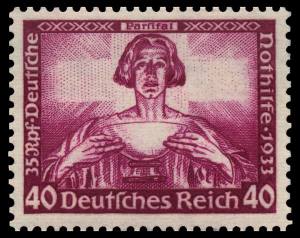 As many pundits have pointed out over the years, Wagner’s Ring Cycle can be construed as a grand prophecy of the rise and fall of the Third Reich, ending in the Götterdämmerung. It was followed by Parsifal, the last opera of his long career, which he consciously intended to show how the German people could attain redemption after the archetypal tragedy of the Ring. Thus we can carry forth this meaning and apply it in the sense of the fulfilled prophecy: what secrets does it hold for atonement and rebirth of the white racial soul in the ongoing aftermath of the cataclysm of World War II?

Wagner was well aware of the core issues in the metapolitics of his time, and a lot of his characters and plot situations symbolized Jewry in its conflict with the Germanic spirit he championed. This is true of the dwarf Alberich, who forsook love for gold in The Ring of the Nibelung, and Klingsor, the self-castrated black magician in Parsifal. I didn’t mention any of this overtly in the story, but in the Author’s Commentary at the end I noted that a hundred years after Wagner, “Klingsor rules the world”.

I have to admit, though, that certain aspects of the opera were too Christian even for me, and I completely left this out of my story. For instance, in the climactic scene Parsifal brings the Spear to the Grail Castle and heals Amfortas; in Wagner’s version this happens on Good Friday, but I changed the “holy day” to Mayday.