by The Kin of Aries

A plague has been unleashed on the world. Is it by the hand of fate, the wrath of God, or human treachery unmatched in the darkest annals of the past?

If we look beyond the Matrix-screens of the mainstream media (MSM) we find a consensus of informed opinion that the coronavirus is real but the “pandemic” is a false crisis manufactured by powerful cliques and political players for purposes of their own. The flood of information fueling this conclusion is tempestuous and confusing, filled with conflicting currents that generate tsunamis of outrage which smash harmlessly against the stone walls of official dictum and public policy. Therefore we have undertaken a project to gather and sort the information, and kindle a beacon in a virtual lighthouse overlooking the storm, guiding the imperiled vessels of truth to a safe harbor. If such a port can be found, it may become a fortress from which to launch effective action against the perpetrators of the plague.

The Godfather of Globalism is George Soros, acknowledged as such by friend & foe, and even sometimes by himself to a friendly audience. Hard evidence for an epidemic intentionally launched to further this cause was provided by King George’s top-tier votary Bill Gates. On October 18, 2019, Gates sponsored Event 201, in which the crème de la crème of one-worlders acted out a script about a pandemic that devastates the population, the economy, and the social order.

They publicly released this video which, as you can see, turned out to be a veritable trailer for the feature attraction that debuted on the real-world stage at Wuhan just a month later. At the end of the video the narrator delivers the message that “the global community must be ready to do the hard work to prepare for the next pandemic.” The secret sub-text tipping off the real plot to those in the know became obvious in the aftermath: “The global power elite is ready to do the hard work of preparing the next pandemic.” Then Soros might step from behind the curtain and add with a wink: “In fact, we already have.”

A startling piece of circumstantial evidence attesting to this scenario is that every attendee at Event 201 was given a cute cuddly plush-toy in the unmistakable likeness of the Covid-19 virus, the existence of which was supposedly still unknown at the time.

Whatever role he may play in schemes for political domination, Gates also has a huge financial interest in spreading contagion, since he is the world’s biggest marketer of vaccines. No less a crusader than Robert F. Kennedy Jr. has exposed his merciless slaughter of innocents in isolated third-world enclaves as guinea pigs for his overkill doses of experimental vaccines. Some conspiratologists link him directly to the Wuhan laboratories, and accuse him of deliberately creating the coronavirus so he could catapult his campaign to “cure” it. 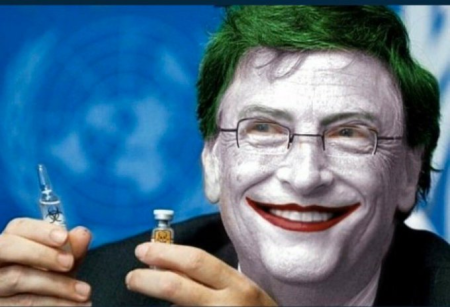 Would-be “Big Brothers” of a 1984-model world have signaled a strategy to use artificially-fueled epidemics for this end long before Event 201. During the Ebola scare of 2014 a researcher named Harry Vox discovered a document published by the Rockefeller Foundation four years earlier which “predicted” future pandemics and succinctly pointed out how they could be useful for a totalitarian agenda. Like the Event 201 script, it’s narrated from a future POV and uses past tense to describe the “fictional” scenario. After giving gory details of the high body count, it goes on: “The pandemic also had a deadly effect on economies: international mobility of both people and goods screeched to a halt, debilitating industries and breaking global supply chains. Normally bustling shops and office buildings sat empty for months, devoid of both employees and customers.” 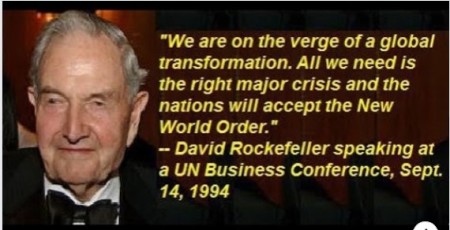 A section titled “Lock-Step” details “a world of tighter top-down government control and authoritarian leadership. During the pandemic, national leaders around the world flexed their authority and imposed airtight rules and restrictions, from the mandatory wearing of face masks to body-temperature checks at the entries to communal spaces like train stations and supermarkets.”

In the real-life coronapocalypse, millions of fed-up people are wondering when it will all end. The Rockefeller document has more bad news: “Even after the pandemic faded, this authoritarian control and oversight of citizens and their activities stuck and even intensified. In order to protect themselves from the spread of increasingly global problems — from pandemics and transnational terrorism to environmental crises and rising poverty — leaders around the world took a firmer grip on power.”

Thanks and a tip of the Sherlock cap to Mike King of the Real History Channel website for digging up Harry Vox’s video and transcribing the critical passages, from which I quoted above. Mike concludes: “George Soros, David Rockefeller, Bill Gates and other Globalists understand the power-grabbing opportunities of mass scare events associated with pandemics of their own making.”