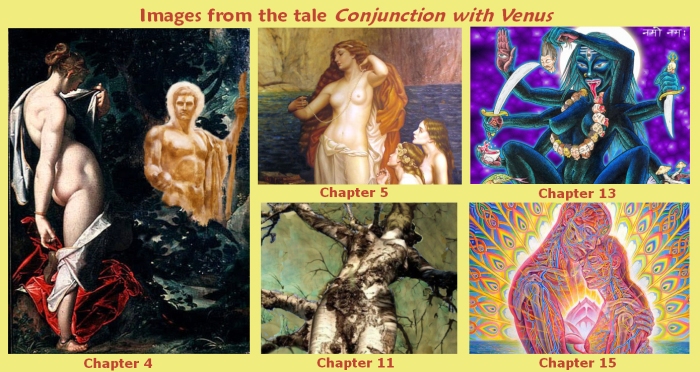 Gail had jealous trepidations about Venus moving into their house, which intensified when Hyppolita revealed that she had a reputation on campus that matched her new name. When Marcus arrived at Venus’ old house to pick her up for the move, he was confronted on the porch by three of her ex-boyfriends.  One of them was a high-rolling businessman named Philip, who made an insulting proposition.  Marcus’ titanic fury blew him away without a fight, but the others made accusations that Marcus’ group was a racist cult, and that “Solarians” and “Ophidians” were code-words for Aryans and Jews. Philip stomped off with a warning that some of his most powerful colleagues were Jews.

Assembled at the table, the six adults and baby Eric got into a brief mind-meld. Then Marcus toasted each of them in turn, a simple ritual in which they greeted each other by their Godnames. When it came to Polaris, Marcus followed up by saying “Welcome home to Thule”, which was very moving for him. This was topped when Marcus and Venus psychically perceived each other turning into the actual divine lovers: Ares and Aphrodite, Mars and Venus. Eric was the only other person who saw it, but the signs of rapture in the two mortal vessels of divinity aroused Gail’s jealousy once again.

In bed that night, Marcus and Gail confronted the challenge to their marital relationship. He said it might be rooted in past lives, and induced an experience in which Gail was transported back to an incarnation in nineteenth-century India, where she was a member of Marcus’ harem of four wives.  The top-ranking wife was none other than an incarnation of Avice/Venus, who was jealous of Gail and mistreated her. This woman was named Radha, and was the mother of a four-year-old boy whom Gail recognized as an earlier incarnation of her own son Eric.

The next morning they experimented: Gail let Venus hold Eric, and it was obvious that the loving connection had carried over ~ the baby even called Venus “Ma-ma”. This led Gail to consent to Marcus’ “conjunction with Venus”.

They lay naked on the grass in the center of a magic circle of stones and primal artifacts. As they made love they expanded into their Godforms of Mars and Venus, who arranged a divine marriage to take place at the moment of climax. The nuptial was interrupted by the intrusion of an uninvited guest: the dark Goddess Kali, who overshadowed Venus in the midst of the sexual act.  Marcus waged a life-and-death struggle against Kali while locked in carnal embrace with her. He saw he had no choice but to launch his semen into her as a deadly weapon. He became aware again of Venus beneath the dark overlay, and hoped his love for her would protect her from the harm he aimed at Kali. But at the moment of truth the forms of the two Goddesses merged into one, and in her passion she cried out: “Fuck me, kill me, fuck me, kill me! Yes, yes, yes!”

In the intensity of their mutual orgasm, Marcus and Venus fell into the opposite sides of the cosmic mirror and emerged as the one being who dwells forever in loneliness in the void. It was Marcus’ second trip to the Abyss, and this time he made the opposite choice: instead of life he chose death. He rose again in glory as the Infinite Creator, whose essence descended to the glade as a radiant androgyne, which redivided into our hero and heroine as it condensed into matter. They grounded themselves by talking over all the mind-blowing events, and looking ahead to their polygamous marriage. Their mutual psychic awareness showed them that Venus had gotten pregnant in the act, and so a new baby would be born into their household.

Indexes for Chronology & Conjunction with Venus