5. The Colonies of Thule

Instant recap: Marcus Geist turned the ‘sixties counterculture on its head by founding a white racial commune which grew into an alternative community so formidable that it challenged the supremacy of the New World Order. Marcus described the conflict as a clash between the Solarians and Ophidians, code-names for Aryans and the Jewish power-mongers. Traditional lifeways were resurrected in the community, along with some new variations on ancient themes, like Alphamega polygamy (see chapter 4).

Marcus’ idea to call his alternative community an “Earth Colony” was based on his knowledge that the progenitors of the white race came from Thule and colonized this planet in the primordial past. He found it delightfully ironic that the locale of the first colony was called the Valley of the Moon. It was quickly populated with spillover kindred from the two Berkeley communes, graduates from the safe house in the Haight, and new members from all points of the compass. A few months after its founding in 1969 Saxon was due to give birth to her first child, which she knew would be a girl by means of psychic empathy. She and Marcus decided to name her Diana, after the Goddess of the Moon, and the babe pulled off a spectacular feat of synchronicity by emerging from the womb on July 20th while the first Moon landing was in progress. “One giant leap for Thule,” said Marcus as took his infant daughter in his arms.

The property came with an elegant mansion that had been built by the previous owner, a wealthy vintner. It seemed likely that most of the many rooms had lain fallow except on special occasions; but now Marcus took great satisfaction in filling them all up with kindred as permanent occupants. He said, “We’ve reversed one of the most degenerate trends of the post-medieval European aristocracy, which maintained vast estates merely for show and status.” His countering principle was: “If you don’t use it you don’t need it, and if you don’t need it you shouldn’t have it.”

Marcus felt that the best setting for rituals and other forms of group communion was outdoors, ideally under the Sun or stars; but he saw the value of having an indoor alternative during inclement weather and other situations. He decided to build a Solarium, a temple of Sun-worship. He visited the Civic Center in nearby Marin County, an architectural marvel that had been designed by Frank Lloyd Wright. Two long wings seem to grow out of the hillsides, and at the top of a central hub is a public library with a domed ceiling. One afternoon Marcus sat here for a time while Saxon did some legal research among the shelves and microfiche. He found himself easily transported into exalted states, his own inner resonance amplified by the psychic effect of the ceiling. He knew that Wright had been a student of the spiritual teacher Gurdjieff, and saw the Sufi influence ~ the library dome was engineered on the same metaphysical principles as that of a mosque. Marcus hired a local architect who had trained under Wright during the construction of the Civic Center, and had him design and build the Solarium in the Valley of the Moon. A key difference was that the dome was transparent, allowing a view of the Sun, Moon, and stars in their perennial cycles. 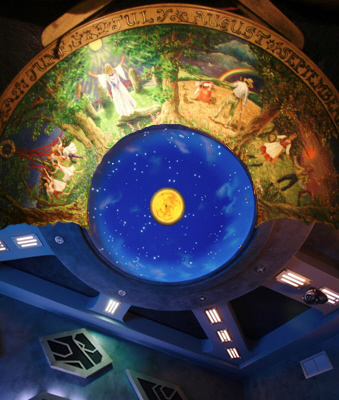 By the mid-1970s the Earth Colony was a unique settlement the size of a large town. Beyond the two grand buildings in the central nexus, the countryside was dotted with cabins, huts, and hobbit-houses, some made of pounded earth and others of stone and baked mud. There were many acres being farmed, with separate tracts using modern equipment and others devoted to low-tech methods with horse-plows and the like. There was even an area on the edge of the woods where an enthusiastic group was conducting an experiment in Neolithic agriculture. If the settlers could have hunted game year-round, the community would have been completely self-sufficient.

The guiding principle of this lifestyle was explained by Victor Noble in his Statement: Marcus’ goal was “to build a primal civilization. This will be an ideal but practicable combination of the best aspects of natural primitivity with refined cultural forms.” Thus in the colony there were ongoing workshops in all the traditional skills and handicrafts that were being revived, including blacksmithing, weaving, pottery for real-life use, animal husbandry, tanning and leather-making. There were a couple of stores exclusively for the residents, and even a bank which did not practice usury.

Education for the children was a radical departure from the mainstream: the whole Colony was a school.  Unlike the unnatural life in the outside world, children weren’t separated from adults.  They spent every day interrelating with a large array of very energetic, unique people, each of whom was talented or knowledgeable in one or more diverse areas.  They all loved relating with the children, and the things the kids did on any given day were worth at least a month sitting on their butts in a stuffy schoolroom.

They also acquired all the academic knowledge, in fact much more and of higher quality than in public schools. There were specific arrangements for this, but it still involved a lot of synchronicity and one-to-one interaction between a kid and an adult with some specialized knowledge. A big challenge was getting the formal credentials for those who might later take up life outside the Colonies. To solve the problem Marcus blazed the trail for what later became known as home schooling. With the aid of Saxon’s legal expertise, they established a precedent which now benefits all the people who home-school their kids.

Marcus was one of the few who understood the real forces that drove the counterculture from start to finish. The mighty current of social change had been channeled leftward by those he called the Ophidians, but it crested and broke up on the shoals of events between 1970 and ’72. The history of the era concocted by the mainstream media conveniently omitted all the developments that ran counter to its narrative, like Marcus’ successful effort to turn hippies into white pioneers who were proud of their race and dedicated to preserving it.

Another big piece that got torn out of the story was how a large faction of hippies cast off the rubric of peace at the end of the ’60s and armed themselves for the apocalyptic showdown with the “system” and its rulers, which they felt sure was coming “up around the bend”. As the peace & love communes died out in the early ’70s, they were replaced by an undercover thrust into the wilderness by the “acid graduates” who resisted the “big chill” and dug in for the long haul. This gave birth to the survivalist movement, with not a word remaining in the public record of how left-wing hippie pacifists evolved into a well-armed bastion of the radical right.

At the extreme was the tiny white nationalist movement, but even this overlapped with the countercultural remnant, at least geographically. A favorite habitat for “hippiebillies” was the hollers of West Virginia, long winding valleys in dense forests which made homesteads difficult to access and easy to defend ~ and this is where the National Vanguard organization chose to build its stronghold. Another trend was the “northwest imperative”, in which white rightists swarmed to a region populated with people of many other persuasions who were trying to get off the grid or out of the Matrix. For such diverse groupings it was usually “never the twain shall meet” ~ except for Marcus.

In 1976 he decided that the Valley of the Moon had reached the optimum population for the lifestyle he wished to cultivate, and set his sights on the Pacific Northwest. He found that land was relatively cheap in certain parts of Washington State because it was not well suited to agribusiness or other commercial uses, and was unpopular among the class of people who could afford to live wherever they wanted. With some creative real estate dealing by Saxon, he pieced together an immense swath of land. There was a lot of turf that could be farmed by the rugged methods used in the first Colony, as well as pasture land, lakes, and forests merging into the foothills of the Cascade Mountains, with a tract extending up through a couple of peaks. The total area was over three hundred square miles ~ “bigger than some countries,” said Marcus.

The new Colony was christened Cascadia, and many people migrated to it from the Valley of the Moon to establish a rudimentary infrastructure. Soon a farm and profitable craft enterprises were in operation, and the population was swelled by an influx of people from assorted off-the-radar subcultures. There were a fair number of survivalists and hippiebillies who awakened to their white identity, white Christians who suspected that Marcus was the second coming of their Savior, and hardcore Aryanists who saw Marcus as a new Führer ~ which was not surprising because he literally channeled the spirit of Hitler. His parents, Magnus and Anastasia, often came for extended visits, and were enthralled by how their son had resurrected the Geist of the Reich in his community. Upon hearing this, some of the Aryanists began using a new mantra: “Heil Marcus Geist!” But Marcus nixed it and created a new one: Sieg Heiligen Geist. He said it was a redemptive upshift of the original, because “Heiligen Geist” is the German term for Holy Ghost.

One thought on “The Colonies of Thule”