Instant recap: Marcus and his suicide squad manned the battlements of their White Alamo and met the invading Federal agents with more firepower than they could’ve imagined: bombs, missiles, and anti-aircraft guns. An Air Force fighter jet finally knocked out the heavy artillery, and the ground forces moved in and firebombed the compound. Marcus was the last man standing, firing at his enemies until the building exploded.

For three days after the attack Cascadia was a black pit of collective despair. Many people were taken into custody as the Feds scoured the charred ruins of the Alamo for anything that could be incriminating. The same was done in all the larger buildings of the main settlement, and even some of the cabins strewn through the woods and hills. But thanks to Saxon’s legal skill, everything had been impeccably arranged in advance to leave not a shred of provable evidence connecting any of the living kindred to the elaborate military operation staged by those who had died. If it had not been for the Feds’ imperative to prevent news of the event leaking to the media, damning falsehoods would have been concocted and hundreds sent to prison. As it was, within ten days not a single person remained behind bars.

The refugees from Soul Haven had arrived and been embraced in the tsunami of sorrow. Diana, Eric, and Marcus’ many other sons and daughters were at the center of the wailing, but soon became a platoon of brave role models as they marshaled their inner strength and stood tall as the pillars of a fortress that could not be leveled by merely physical weapons. After those three dreadful days had passed, the community revived and people resumed their usual tasks with grim determination to carry on the work of Marcus.

On the fourth day a communal meeting was held which all attended. The first to speak were Marcus’ three eldest wives: Gail, who was the mother of Eric, Saxon the mother of Diana, and Venus who was also Marcus’ first Shakti, and hence was the dearly beloved “mistress” of almost a hundred of the men young and old. The three women poured out their hearts to their kindred amidst copious tears, and after the mighty spasm of grief had discharged itself, there began a discussion of the harsh reality facing the group.

In past crises Marcus had always been there to take decisive action fueled by the solar fire flowing through him directly from the heights of Thule. But now their pipeline to Heaven was gone and they were left like fatherless children under an empty sky. The Winter Solstice was only nine days away, and since the kindred could come up with no plan to carry them forward, they decided to proceed with their usual ritual.

The Solarians honored the cycle of the year in the same way their ancestors always had, with festive rites on the eight Solar Days: the solstices, equinoxes, and cross-quarters. A special edifice had been built for these events: a theatre stood atop a low flattened hill fronted by a semicircle of tiered seating on a natural concave slope. The seats were long curving rows of pounded earth, with enough space between tiers for dancing and rhythmic movement. There was a small orchestra pit for those kindred who were adept on various instruments; there weren’t enough of them for a complete orchestra, but the gaps were seamlessly filled by talented keyboard artists.

The Summer Solstice was a time of rejoicing with the Sun in his full splendor high overhead at noon; but the winter rite was solemn with everyone gathered in darkness and chanting to classical requiems. Then as midnight approached Marcus and his circle of adepts would stand at center stage and lead the assembly in adjurations to call back the Sun from his descent, to persuade him to change course and begin his annual rise from the heart of darkness. At the stroke of midnight came a miracle assisted by technology: from the roof of the theatre an electric sun blazed forth in a burst of glory in response to the chants and the push of a button. The mood instantly shifted to hearty celebration in praise of the Sun, with songs of faith that he would steadily ascend to the zenith six months hence.

Now in the daylit hours of the present sad Solstice, the usual crew of workers made the preparations of setting the stage and decorating the theatre. The sun-globe was similar in size and shape to a disco ball, but vastly superior in the effect it produced. The men took it from a storage space in the theatre’s attic and hoisted it up through a hatch in the roof, just as they did every year. But as they prepared to set it on its mounting, the slip of a foot and a careless hand caused it to clatter to the edge of the roof and then plunge over it, eluding desperate efforts to grab it in time. The globe fissured as it hit the ground in back of the theatre, still intact; but then it bounced over the ledge of a sheer cliff, and the crew watched in shock as it shattered to bits on the stony ground a hundred feet below.

The news of the accident distressed Saxon as much as those who had committed it, but she kept a grip on her feelings and tried to console them by saying, “It’s the hand of fate. There’s no earthly symbol or substitute for Marcus as our Sun.”

Eric had been thrown into a state of clinical depression by his father’s death, and now in a hideous wail he shouted, “This ritual is a farce! We should just call it off and jump over the cliff ourselves!”

This struck a dark chord with many of those present, though they argued half-heartedly with Eric. He was adamant in his suicidal resolve until Saxon took him by the shoulders, looked him in the eye and said: “What a nice spectacle all those bodies will be for the Feds.”

Eric gasped and his demeanor drastically changed: his face flushed with rage, he clenched his fists, and in a grim steely voice said, “Never!” He looked around at his kin and felt abashed. “Sorry I lost it,” he said; “On with the ritual! Dad will be with us in spirit.”

There were huzzahs and brave smiles, and the preparations resumed. A spotlight was hauled up to the roof to replace the sun-globe, though the esthetics would be shabby in comparison.

At 11:30 PM the ritual was in full swing. All the seats were filled for all the kindred were present, including those who had been released from jail a few days before. The hymns overflowed with heartfelt sorrow, and the requiems with tangible despair. The lights gradually dimmed as the hour approached; the circle of adepts at center stage were illumined only by the candles that surrounded them. At last came the chant for the Sun to return, and the heart of Apollo could not fail to be moved by the yearning and pleading in the voices below. With seconds to go, a man at the side of the stage looked intently at the radium dial of his watch and prepared to hit the switch that would turn on the spotlight. But his hand paused as his attention was suddenly drawn upward, along with the eyes of everyone present.

There was a light in the sky, muted and flickering at first, but then steady and growing in brightness, silvery white and then waxing golden. It was directly overhead, as if at the zenith~ and then it appeared to descend. The stage and theatre became illuminated with the mystic light, not as in daytime but like unto a Full Moon. The light compacted itself into a discernible sphere, and the crowd gasped as it paused and hovered at a point level with the roof of the theatre. There were some joyous shouts of “Praise the Sun!”, for the miracle-sphere filled the place of the shattered sun-globe, though it was larger, about eight feet in diameter. But then the wonderment redoubled as the ball of light began again to sink. It descended right into the circle formed by the adepts, who were obliged to step back as they watched it settle before them. They were dazzled not only by the light but by a fulsome charge of ecstasy.

The entire assemblage seemed to hold its breath as the sphere shimmered on the stage. They focused their eyes and could see within it a protean form, whose contours quickly solidified. It could have been a God or an angel, but it was a man; indeed, it was Marcus. Before a single voice could be raised in astonishment, he looked around at his friends with a smile on his face and a twinkle in his eye, and said: “What’s with all the doom and gloom? Didn’t you think I’d be back?” 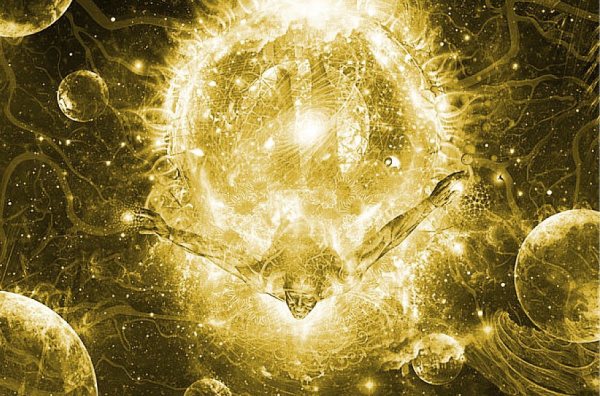