Instant recap: The death of Marcus in combat against the Feds was a terrible blow to the Solarian Sodality. The people carried on bravely by holding their Winter Solstice ritual as usual only two weeks later. The climax was at midnight, but suddenly the script was breached as a sphere of light appeared overhead, slowly descended onto the stage, and condensed into the living form of Marcus. 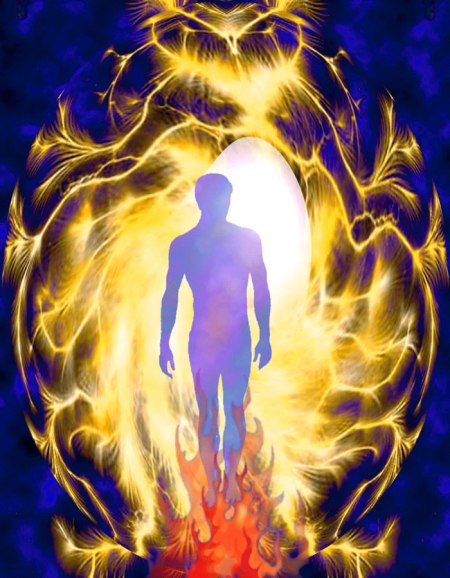 Many people rushed from their seats and climbed onto the stage. Marcus’ wives and children wanted to embrace him, but he waved his hand and the circle of light around him got brighter, forming a perimeter which the people found they could not cross. He looked into the eyes of Saxon, Gail, Venus, and others, and said, “I’d dearly love to hug you all, but alas, you can’t touch me yet. This is my solar body, and it’s a little rough around the edges. I have to get the hang of manifesting through it here in the physical world.”

“And again and again,” said Marcus. “We have a lot of unfinished business, as y’all know.”

The first order of business was to finish the ritual. Marcus took over as Magus and went through it just as he had always done in the flesh; but never before had the collective exultation reached such a pitch, at the return of their very own Son of the Sun.

At the end Marcus addressed the throng, saying: “Our Geist has passed through its dark night of the soul. Now it’s getting fired up again, and our Colony of Thule will endure and prosper. But I’ve learned a lot on my trip to the homeland ~ a very humbling process, because all my mistakes and imperfections stood out in that crystal-clear light. We have to recalibrate our mission and make some strategic changes of direction.”

People in the audience asked questions and raised issues, but Marcus held up his hand and said, “My energy is ebbing now, so I have to split. But this time I don’t think there’ll be any doubt when I say that I’ll be back.” Amidst cheers, tears, and happy shouts, Marcus dissolved in a glittering shower of sparks.

Over the next several weeks Marcus materialized whenever a group of kindred were talking or thinking about him, or engaged in earnest discussion about the sodality. Eventually they realized that they could ritually invoke his presence in a meditation circle, and this became a regular practice. By these methods, Marcus and his kin gradually worked out an open-ended plan by which the newly-rekindled Geist could thrive in Cascadia, reclaim possession of Soul Haven, and expand their numbers through all the nations of the white world. Thus they would prepare for the fulfillment of Vasudeva’s prophecy (see chapter 9) of a rebirth of the White Spirit at the turn of the millennium, and possibly even an Avatar who would take up the mantle of Marcus.

Magnus and Anastasia were astonished by a call from Saxon, transforming the depths of their grief for their son into joy, or rather a joyful hope for something that seemed impossible but which Saxon assured them was true. They wasted no time traveling to Cascadia, and in a large circle of kindred they had an ecstatic reunion with Marcus. The presence of his parents enabled him to maintain a strong, tangible manifestation for a long time, and it developed into a lively conversation in which everyone participated.

One of the younger people said, “I always wondered about something, but never got around to asking: Victor’s book is titled R. Marcus, but I never heard Marcus’ first name referred to by anyone. So what does the ‘R’ stand for?”

Some people laughed, including Victor, and Marcus said jovially, “Ah, the great mystery! Dad, do you want to tell them my largely forgotten first name?”

Magnus broke into a big grin, looked around at the people, and said “Ra.” There were some puzzled looks, and someone said, “You mean like “Amon-Ra?”

“The first Thulean Sun-God,” said Marcus. “But the reaction of the folks just now shows why I never used it. It’s not exactly a familiar name.”

The man who had asked the question said to Victor, “But why did you make a mystery of it in the book?”

Victor looked embarrassed and said, “I have to confess it was kind of an ego-trip. The clue is in the beginning of Part 3, when Marcus visits a churchman who tells him that evidence about Jesus from the Dead Sea Scrolls is being suppressed. Part of the scoop involves the lost original Gospel, which was the source-book for Mark, Matthew, and Luke.”

“I vaguely remember that from a religion course,” said a kinsman, “but what was the name of the proto-Gospel?”

“So,” said Marcus to Victor, “you thought that your little bio of me would inspire a whole new canon that would resonate down the ages.”

“Yep!” said Victor. “But now I’d be happy to skip the canon if only the Geist can endure.”

“Vasudeva has prophesied that it will,” said Marcus; “and surely more books will be written in the fulness of time.”

More fiction in the same saga:

Realm of the Ram

One thought on “Rekindling the Spirit”